EDIT: It has come to my attention that I spelled window sill wrong. In the piece below I spell it window seal. Spelling isn’t my strong suit. I’m also southern, so seal and sill sound the same coming out of my mouth. While I like to say I don’t want anyone correcting my spelling, I really do appreciate the spelling help. Anyway, I’m not changing it below. It will serve as a reminder to my future self.  Thank you.

This is a writing prompt from @TurtleWriters from earlier this week. I might be late submitting it, but I have a feeling they won’t mind. I wrote over half at work during breaks earlier this week and finished it tonight fueled by Not Your Mamma’s Apple Pie. It’s rough, but I’ve proofed it to the best I can at the moment. I’ve not edited or revised it as it’s not going anywhere. The prompt is below. Enjoy. 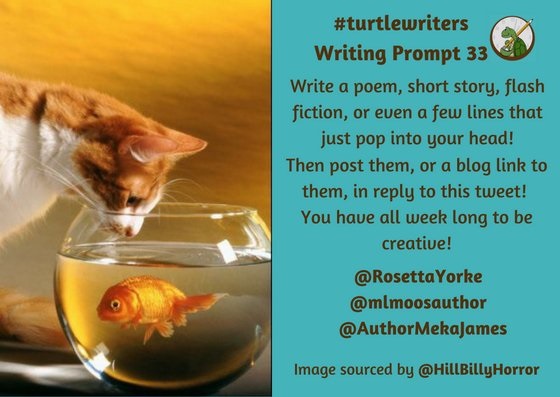 Baxter strolled around the kitchen looking for something to do. He had already stopped by his food bowl and was hoping to get the prime warm spot on the window seal. It was still early, but Gerald woke up with the humans and usually stole the coveted spot.

Baxter meandered over to the living room stopping to rub against the door jam. He could go for a good scratch. Weaving through the chair and table legs he spied the empty window seal. Score. Just what he was looking for.

Leaping on the seal Baxter turned and began to settle down for a nap when a glint got his eye. He lifted his head and stared at the table beside the couch. Shiny. Big. Wait…something is moving.

Baxter jumped down crossing the room to jump up on the couch to make his way to the table. What is this? Baxter approached slowly sniffing as he went. His nose bumped the cold hard edge. Smells familiar. This object is see through. Bowl. See through bowl. He lifted his head to look down into the bowl. What? Is that water? What is in this water.

Baxter backed up and lifted his paw. Let’s check this. He slowly lowered the paw into the wet. He smelled the wet on his paw. Then he licked it. Water. What is swimming in my water? Baxter looked down on the object. Orange. Flowing. He moved his head to look through the bowl on the side. That thing has eyes. What animal is this?

What did Gerald tell him? He remembered something about an animal that swims in the water. Where is Gerald. He would know.

That thing is looking at me. Wait. Where is Gerald? This animal is the same color. Gerald has two eyes. Gerald? Is that you? No. It’s can’t be. Let me check.

Baxter jumped down and raced through the house. First stop upstairs where the humans sleep.

“Gerald,” he loudly cried into the room. Under the bed. In the bath, “Gerald.”

Next room. One by one Baxter raced through calling for Gerald to no response. Could it be?

Baxter approached the bowl and leapt beside it. He peered down into the bowl at the orange creature and circled it never taking his eyes off it.

Could this be Gerald?

“Gerald,” he cried. What did they do to you?

Baxter sat on his back haunches. “Gerald!” one more cry. He placed his chin on the bowl and watched his friend swim around. Why would they do this to you? You never did anything wrong. I never should have let you take the blame for the bath incident. And the garbage incident. And the chicken fiasco.

“Gerald!” Baxter wailed as he laid on his side starting into the clear bowl. He pawed at the glass. My friend. They have ruined you.

Baxter jumped up. I will fix this. If I let you dry out you will turn back. That’s it!  It’s the bath. You got too wet and you changed. They humans didn’t know to dry you out.

Baxter looked back into the bowl and stuck his paw inside. Swatting in the water at Gerald seemed to help. His paw cornered his friend and he was able to sweep him up and out of the bowl.

Gerald was now flopping around on the table. Baxter gently grabbed him with his teeth.

I’ll put you on the window seal. It’s the warmest spot.

Baxter moved to jump down when the back door slammed shut. He could hear the humans coming. He would have to hurry. He jumped off the table and heard it.

What? That’s Gerald. Baxter dropped the orange creature. He looked up to see Gerald entering the room rubbing against the door jam.

“Gerald?!” Baxter stared in disbelief. Where have you been?

“Baxter.” Gerald cried. The humans took me to the doctor. They stuck me with medicine on my back legs and now they’re sore. What are you doing with that fish?

Gerald sat and looked down at the fish. You going to eat it.

One thought on “Cat/Fish Writing Prompt”