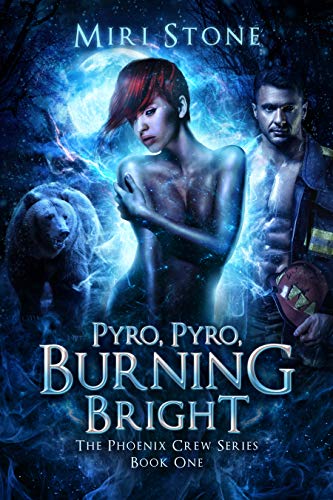 I read Miri Stone’s book Pyro, Pyro, Burning Bright on the recommendation of a friend. And I love it. It’s a paranormal romance (my favorite) that opens with Mackenzie standing in front of a burning building with no memories and a voice in her head telling her to run. And that is one hell of a hook.

And that is one hell of a hook.

Mackenzie finds her way to a tiny town and nabs a job as a barista. Her arrival in this small town coincides with arson attacks. The voice in her head pulls her toward the fires where she meets Fire Chief Ryan. Sexy Ryan is a bear shifter and his bear has a nose for Mackenzie. And we are still early in the book.
So, here is the basic run down. Mackenzie is being hunted by a shifter because she’s connected to the burning building where she woke up. An arsonist is playing with the bear shifter fire fighters. Mackenzie has two voices in her head leaving the reader to think she’s a special shifter. She’s working for a baker with two bear shifter cubs. And Ryan’s bear says Mackenzie is his mate, not that Ryan is complaining, but he has his own skeletons to battle.
That is not even a quarter of the way through the book. This is a full-length shifter novel worth the price and the time it takes to read.
My favorite aspect of this novel is how the author lets you learn about Mackenzie’s past with the character. The more she learns the more you learn and the more you want to know. I was constantly wondering what else we would learn together.
Ryan is not without his own flaws. He is also going through his own demons and grows as he faces conflict within his crew and with the fires he faces on the job. Let’s be honest, a fireman love interest always creates a steamy visual. Yum.
Stone’s characters are fun and complicated. The crew she builds around Ryan leaves you in no doubt that the story will continue. She has created a world around Mackenzie and Ryan that you will want to come back to again and again.

The sex scenes were HOT. There was definite fanning happening while reading this novel. The tension between the two main characters really heated up their “relations.” All of this paid off big when they took that final step into full commitment, where sex becomes love. (Yes, it’s cheesy, just go with it.) This novel gets a solid 4 out of 5 flames. I want to give her 5, but I also want to see how much the sex scenes improve in her next novel. 🔥🔥🔥🔥

The combination of characters, location, and plot was intense. The story builds and builds to a point where I didn’t know where else it could go. Some of her foreshadowing was a smidge obvious, but it did add the fun ‘oh, I think x will happen’ aspect to the read. I give this novel 5 out of 5 stars. ⭐⭐⭐⭐⭐
Don’t forget to like and leave a comment below. Or go read the book and see for yourself! Then come back and let me know what you think.
This has been another edition of Lucy’s Book Reviews.
Please follow and like: